Over the Bridge: The Story Of Arnhem and Other Poems’ by W.SVernon 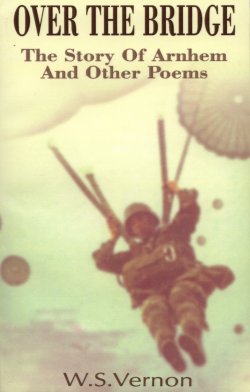 Over the Bridge by W.S.Vernon

To quote the book’s back cover:

The Battle of Arnhem took place in September 1944 as part of Operation Market Garden, the largest airborne operation ever. A large number of paratroopers were dropped in three separate areas in order to occupy the bridges from the Belgian border to Arnhem. However, the attempt failed and many lives were lost in the ensuing altercation.

Using this as the inspiration for his anthology of poems, W.S.Vernon creates a nostalgic and melancholic atmosphere throughout the collection.

The book can be purchased via the publisher, or from Amazon – click on the image above, or use this link to find the book at Amazon.co.uk

The poem is an extended one, with a very low-key, almost depressing, atmosphere – certainly an antidote to any glorification of battle. Due to its length, it is presented on this site divided up over several pages:

I am aware that verse XIX is missing – it is not in the book either. I’m not sure whether it has just been missed out completely as a printing error, or XVIII should in fact be divided into two separate verses.

'Over the Bridge' by W.S.Vernon