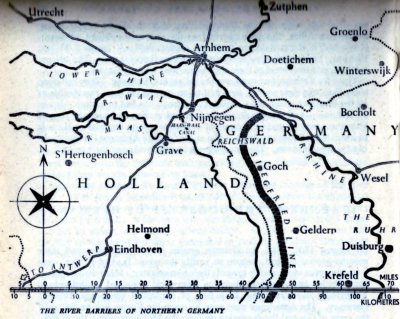 The line of the Albert Canal was defended by what was left of the 15th Army, by detachments of the Hitler Jugend sent with all speed from Germany, and by such garrison troops as were available on the spot. The panic was ruthlessly checked by the adoption of the sternest measures, and as the days slipped by and the British armies made no further movement, the Germans consolidated their defence. Its most important section was that covered by the line of the three rivers just mentioned. Behind them was but a skeleton for the Siegfried Line here peters out in the neighbourhood of the Reichswald. Between the end of this forest and the Waal at Nijmegen runs a ridge of ground which, though it is only 633 feet at its highest point above sea-level, constitutes the only range of hills in Holland. It is heavily wooded, but from the top it is possible to observe the country for a long distance in every direction. For many years this ridge had formed the favourite exercise ground for the Dutch Army, and the canal connecting the Maas with the Waal, and the Maas itself, running respectively along the western and southern sides of this hill, made it an ideal defensive position.

The Germans were quick to reinforce its natural strength by every possible means There is no doubt that they feared an attack by airborne troops, and during the first fortnight of September they made all possible preparations to meet it. More and more anti-aircraft guns were brought up, and reconnaissance photographs showed each day some new position where work on digging them in had begun. Agents reported that the Dutch population, including twelve-year-old children, were being pressed into service to prepare a main defence line running along the Waal to the sea and a forward line following the Maas. Field-Marshal Montgomery had two courses open to him. Either he could remain where he was, content with an advance which, in less than a month, had brought him to the threshold of Germany, or he could, by crossing the three river barriers in one fell swoop, seek to snatch the victor’s final crown. He made the second and bolder decision, and he chose as his instrument as many of the airborne troops as could be assembled in time. These consisted of three divisions, the 82nd and 101st, belonging to the American Army, tried troops whose mettle had been tested in the Cherbourg Peninsula, and the British 1st Airborne Division, whose valour in North Africa, in Sicily, and in southern Italy had earned for it a worthy reputation. To them was given the task of forming a corridor of which the axis would be the Eindhoven-Veghel-Grave-Nijmegen-Arnhem road. Its formation would ensure a straight and swift advance to the gate of Germany. The bridges over the canals and rivers along the road, notably the nine-span steel bridge at Grave, that crossing the Maas-Waal Canal west of Nijmegen, the great single span steel road bridge over the Waal at Nijmegen and the bridge over the Lower Rhine at Arnhem were also to be seized.

The 101st American Division was to create that part of the corridor from Eindhoven to the outskirts of Grave; the 82nd American Division was to establish its central section from Grave to Nijmegen and to capture the high ground south of Nijmegen overlooking the exits from the Reichswald; while the 1st British Airborne Division was to seize and hold the road bridge at Arnhem. These three divisions were, in fact, to form ” a carpet of airborne troops ” over which the 2nd Army might pour to break down the last barrier defending the Reich and thus gain direct access to the Ruhr.