THE STRUGGLE FOR THE CROSSINGS

At the outset all went well. The weather on Sunday, September 17th was good. At 10.15 in the morning, six officers and 180 men of the 21st Independent Parachute Company, under the command of Major B. A. Wilson, took off in twelve Stirlings. They were the Marker Force, and it was their duty to lay out the aids and other indications for the guidance of the main body following close behind them. They reached the dropping zones without incident, only one aircraft being fired at. A few scattered Germans were found on the ground and fifteen of them taken prisoner. Two parachutists were hit during the descent, one in his ammunition pouches, the other in his haversack. Neither was hurt. In half an hour the marks were in position, and then the first lift came in. 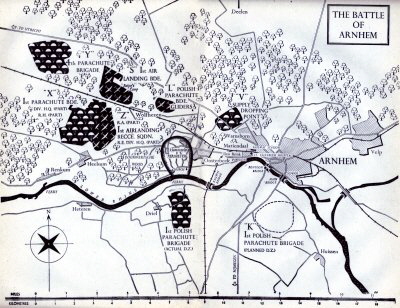 It was a fine sight to see the gliders carrying the 1st Air Landing Brigade and Divisional Headquarters swoop down to their appointed places, followed almost at once by the billowing parachutes of the 1st Brigade swinging down in hundreds. The drop and the glider landings were almost completely successful, ninety five per cent. of the troops reaching their rendezvous at the right place at the right time. The three battalions of parachutists and a parachute squadron of Royal Engineers forming the 1st Brigade under the , command of Brigadier G. W. Lathbury, D.S.O., M.B.E., moved at once to  their allotted task. It is their fortunes which must first be followed. The plan laid down for them was this: the 2nd Battalion, commanded by Lieutenant-Colonel J. D. Frost, D.S.O., M.C., a veteran of Bruneval, North Africa and Sicily, was to push on as fast as possible through the village of Heelsum and thence along the southern route, a road running close to the north bank of the Lower Rhine, until it reached the bridge, which it was to capture and hold. At the same time, the 3rd Parachute Battalion would be in the centre of the advance and move along the main Heelsum-Arnhem road to assist Frost’s men by approaching the bridge from the north. The 1st Parachute Battalion was to remain with Brigade Headquarters in immediate reserve, ready to be used wherever and whenever the necessity arose. As soon as the 2nd and 3rd Battalions had completed their immediate task, the 1st Battalion was to occupy the high ground just north of Arnhem. To make assurance surer, most of the Air Landing Reconnaissance Squadron were to attempt a coup de main against the bridge. This, as it turned out, they were unable to do, for nearly all their transport failed to arrive.

The 2nd and 3rd Parachute Battalions, both of which had with them a troop of anti-tank guns and a detachment of the 1st Parachute Squadron R.E., moved off punctually at three p.m. through well-wooded country. Let us first follow Frost and his 2nd Battalion. In Heelsum, where they arrived soon after leaving their dropping zone, they ambushed a number of German vehicles and took about twenty prisoners. The Dutch inhabitants, who turned out in force, everyone wearing ” some garment or part of a garment coloured orange, some with favours, and some with orange armbands,” said that there were but few Germans in Arnhem itself. The parachutists pushed on along the six miles of road which separated them from their goal, first encountering and overcoming opposition in Doorwerthsche Wood. On the way to the road bridge they had to pass to the north of the bridge carrying the railway over the river. Here trouble was caused by an armoured car and here, too, they suffered a disappointment. The railway bridge was blown just as Lieutenant Berry and a section of ” C ” Company reached it, together with Captain E. O’Callaghan, M.C., and a number of the 9th Field Company R.E. Some of the men were actually on the bridge when it went up. ” It seemed,” said Corporal Roberts of the Royal Army Medical Corps, who was present, “to curl back on us, but no one was hurt.”

The struggle for the crossings