In August 1944, General Bernard Montgomery proposed a daring Allied offensive of one powerful thrust through Holland, across the Rhine and into the German heartland. The plan, requiring many divisions and virtually all the logistic support available to the Allies in Europe, was not agreed to by General Eisenhower, the Supreme Allied Commander. In its place a smaller scale plan, but still a very ambitious one, was approved to secure a bridgehead across the Lower Rhine (Neder Rijn). Montgomery’s 21st Army Group would attempt a narrow thrust to and beyond the Rhine, largely supported from its own resources. 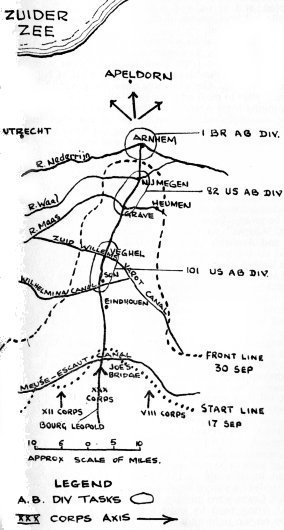 There is a more detailed map of this plan on the Maps of the Arnhem area page.

The essential task of the airborne forces involved was to seize intact the bridges over the canals and rivers en route, notably those at Son, Vegel, Grave (over the River Maas) and Nijmegen (over the River Waal) and finally the Rhine road bridge at Arnhem. This part of the plan was codenamed Operation “Market”.

Operation Market was to be carried out by the 1st Allied Airborne Army under the command of General Browning. This included

The Americans were to open the corridor from Eindhoven to Nijmegen, whilst the British 1st Airborne Division under Major-General R.E. Urquhart were to seize the bridge at Arnhem.

The 2nd Army was expected to reach Arnhem in 48 hrs.