In 1956 Hackett assumed command of the 7th (Desert Rats) Armoured Division in the Rhine Army, succeeding K.C. Cooper. The Division was positioned in the north and occupied the critical narrow sector between the East and Hamburg during the uncertain and dangerous 1950’s period of the Cold War. Despite being an elite formation, it had all the problems then facing the Army, in equipment, organisation, and personnel. The new Conqueror tanks were unsatisfactory, with inadequate gunnery and mobility, and their turrets could decapitate unwary crew members. The NATO FN rifles were unreliable and prone to jamming, the Austin Champ wireless jeeps were top heavy, bad on rough ground, and with fragile half shafts. The Division could not cope in winter weather conditions; troops on exercise often had to forage for food because of logistical breakdowns. The national service recruits were disaffected because of poor pay, poor food, the denial of national insurance contributions, and having to pay for equipment replacement. The rates of crime and social disease were high. The Suez Crisis brought this home in 1956 when reservists recalled to the Rhine Army as replacements for redeployed troops mutinied, and caused chaos in many other units. It was clear to Hackett and other senior officers that the Army was in need of radical overhaul and reorganisation. The problem was in convincing others of the need for effective change. 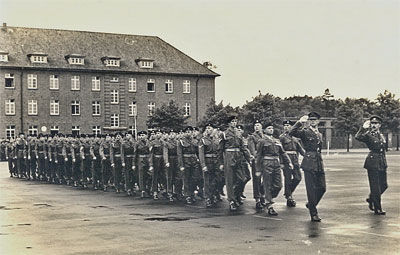 In this photograph the block to the rear housed the main Divisional HQ, and the middle of the three floors was “G” Branch. Hackett’s office was at the extreme left of the picture.

Article provided by Thomas Knott, who with the HQ “G” 7 Armoured Division 1955/56 with Major-General Hackett.