MORE than 100,000 Germans in West Holland are in process of organising a mass getaway. They are attempting to withdraw north and then eastward through the 25-miles gap between Arnhem and the Zuider Zee. 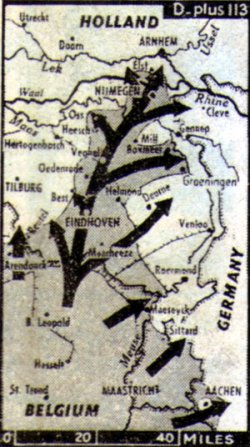 The gap is their only hope of escape.

The British corridor from Eindhoven to west of Arnhem bars all other west-east routes to the Reich.

The Luftwaffe yesterday made an all-out attempt to aid the withdrawal by an attack on the great Nijmegen span bridge, across which all Allied transport must pass to Arnhem.

From five o’clock onwards last night the German planes used everything, from bullets to a pick-a-back glider bomb in the attack.

Allied traffic was halted for a short time while debris was cleared round a 20ft. hole near one of the approaches.

The British corridor continues to broaden. General Dempsey’s forces are making steady progress in the two-flank advance west and east of it
Canal Line
British and Canadian troops on the west hold a firm line along the Antwerp-Turnhout canal.

They have mopped-up a six-mile stretch of territory.

Farther north on this flank there is very stiff fighting in the woods to the west of Oedenrode where 48 hours ago the Germans momentarily cut the corridor highway.

The Germans are fighting well to hold this flank to make possible the general withdrawal from West Holland.

East of the corridor two re-equipped German divisions, the 107th Panzers and the 10th S.S., have had 130 of their 200 new tanks smashed by the British armour, and opposition to our thrust is diminishing.

Meanwhile, in their offensive against Calais the Canadians have cleared the whole area west and south-west of the town.

The Germans have withdrawn into the town itself and, protected by water inundations, are offering heavy opposition. Reuter.

Throughout the British south-east “hell-fire” area bills were posted yesterday carrying this message from Mr. Herbert Morrison to the townspeople: “Every sympathy with the gallant citizens in the concluding stages of their ordeal. Hold on! I am assured by the competent military authority that the end of your trial will not be long delayed.”