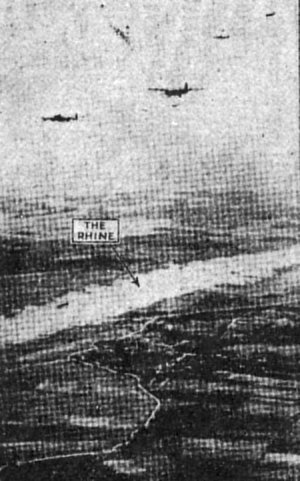 The R.A.F. and British Airborne and Parachute units played a big part in the operation. Here are R.A.F. Halifaxes towing British Horsa gliders over the Rhine as the great air army flew deep into Holland, by-passing flooded areas and turning the German line.

A GUNNER in an escorting aircraft keeps watch for enemy fighters as part of the Allied armada in perfect formation crosses the coast of Holland. Luftwaffe opposition, on the whole, was slight, although some enemy fighters did try to break through.