Dutch Towns Taken in First Hours: Fierce Fighting
EARLY to-day there was every indication that the first stage of the great airborne invasion of Holland had gone entirely to plan. A number of Dutch towns have already been captured, and Lt.-General L. Brereton, commander of the attacking 1st Airborne Army, and his staff were described by one war correspondent last night as “highly elated” at the success of the operation. 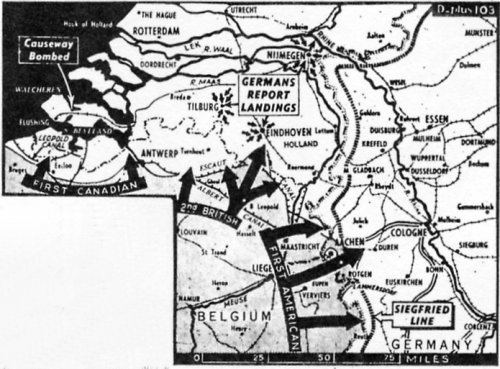 One staff officer of Troop Carrier Command described the landing as “successful beyond all expectation.” It is believed that very few of the troop-carriers were lost to enemy fighters or A.A. fire.

To-day the Airborne Army, together with the British 2nd Army, was engaged in what may well prove to be the final, decisive battle of Germany – Major-General Paul Williams, commander of the troop-carriers, yesterday described the attack as “the knock-out blow to the already staggering enemy.”

The air army swooped across the water-belt of Holland, the strongest defensive position in Western Europe. Success in the battle now raging will mean that they have turned the line of the Rhine, the Reich’s last defence.
ZERO HOUR – LUNCH TIME
Before R.A.F. crews took off they were told: “You are about to take part in an airborne operation transcending in importance even the one launched on D-Day. It is an operation vital to the outcome of the land battle. Success may mean all the difference between a rapid decision in the west and a protracted winter campaign.

Up to early to-day there was little detailed news of the airborne army, but it is known that it encountered heavy opposition in many places. Even at these points, however, the paratroops and gliders made good landings.

General Eisenhower’s H.Q. is maintaining strict secrecy about the movements of the air army, but the Germans declare that the landings were made in the areas of Tilburg, Eindhoven and Nijmegen, and on the northern bank of the Rhine, west of the German border.

The three places named are all important communication centres in an area which, according to Berlin, is only a few miles ahead of the spearhead of the Second Army, which yesterday launched a heavy tank assault towards Eindhoven.

The airborne assault to open the Battle of the Rhine began at 1 p.m. yesterday.

Airmen over Holland at the time said that the sky seemed empty. Then, suddenly…from the west came plane after plane, hundreds of them, bringing the First Airborne Army to the field of battle.

Fighters flew above, below, and to the sides of the transport fleet…a fleet of more than 1,000 gliders, troop-carriers, and two-planes carrying a fully equipped fighting force.