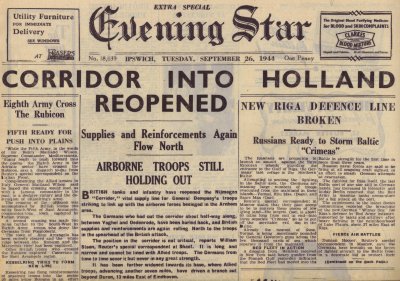 The Germans, who had cut the corridor about half-way along, between Veghel and Oedenrode, have been hurled back, and British supplies and reinforcements are again rolling North to the troops in the spearhead of the British attack.

The position in the corridor is not critical, reports William Steen, Reuter’s special correspondent at Shaef. It is long and narrow and cannot be lined with Allied troops. The Germans from time to time sever it but never in any great strength.

It has been further widened towards its base, where Allied troops, advancing another seven miles, have driven a branch out beyond Duren, 13 miles East of Eindhoven.

The British airborne troops in the Arnhem area, now in their ninth day of battle, are still fighting heroically. An increase in German shelling has forced them to shorten their perimeter, but Typhoons of the Tactical Air Force, operating in what would normally be regarded as impossible flying weather, have been dealing with German gun and mortar positions, cables Harold Mayes, Reuter’s special correspondent with the Tactical Air Force. The Typhoons have also attacked German observation posts on the high ground overlooking the airborne positions.

F. B MacGarry, Press Association correspondent at Shaef, states that for the time being, at the request of General Eisenhower, there is to be a security “dim-out” on news and speculation on the fighting in Holland.

So long as the situation remains fluid the only news to be given will be that authorised by Field-Marshal Montgomery’s headquarters, news known by them to be also available to the enemy.

Ominous conclusions need not be drawn from this development and in fact such news as is available is on the whole reassuring. The primary intention is to prevent the enemy from getting information which he may need very much indeed. There have been a number of such dim-outs of a similar nature and with a precisely similar intent since D-day and there have been complete black-outs on some occasions.

Almost invariably the absence of news for a few days has meant that good news has been in the making.

The enemy hold Elst which is on the main road halfway between Nijmegen and Arnhem and between the Waal and the Neder Rijn (lower Rhine) and while they hold it they are inconveniencing our columns but they are not preventing the forward flow of men and supplies because we apparently hold roads to the East and west of Elst.

The position of the airborne troops North or the Neder Rijn is apparently unchanged and supplies are being dropped to them whenever the weather does not interfere with this routine operation. Supplies were dropped to them yesterday.

The base of the whole of General Dempsey’s thrust is being steadily strengthened and it is about twice as wide as it was a few days ago.

British troops from the Canadian Army took Turnhout on the Antwerp-Turnhout canal yesterday and advanced Northwards beyond it. British troops moving East reached the area of Reusel and to that extent widened the base of the Allied salient.

Allied patrols who advanced from the Waal (the main stream of the Rhine) to the Neder Rijn (or Lek) about the area of Ochten reported that the enemy were digging in along the Neder Rijn.

They are also reported to be digging in on the Maas but whether at some point close to the British corridor or along the North-South stretch in front of the German frontier is not clear.

German stands in these areas would have to take into account the fact that. their difficulties would be added to by the natural intersections of their lines of communications.

In the Aachen-Stolberg sector the Americans are drawing more enemy artillery fire. Yesterday the Germans forced several thousand refugees through our lines North-West of Aachen. The refugees are not thought to be Germans and it is possible that the German action was caused by shortage of rations.

Stolberg has been practically cleared of the enemy, and the fighting is now mostly confined to the South and East of the town and to the area of Busbach where American patrols found the Germans strongly entrenched.

A slight advance was made In the Roetgen area against stubborn opposition from pillboxes.

In the Nancy area about Marsal to the South of Chateau Salins a fairly heavy German counter-attack was repulsed yesterday.

The Seventh Army have made advances towards the Vosges, and have captured Jeuxey three miles North-East of Epinal. St. Ame in the Remiremont area, has been cleared. The Germans established a number of strongpoints along the Lure-Ronchamp road, but the Allies bv-passed them and continued their advance In the Seventh Army area enemy resistance varies from strong to medium.

General Dempsey’s Second Army have extended their salient North-East of Eindhoven to Oploo (ten miles from the German frontier), which they have captured, says Harold Mayes, Reuter’s special correspondent.

In South-East Holland Belgian patrols have pushed on beyond Veert, about 15 miles South-East of Eindhoven, and to the North of Maaseyk, on the Belgian-German frontier, about ten miles South of Veert.

Besides capturing Turnhout, Canadian troops have won a new bridgehead across the Turnhout-Antwerp Canal, in the Ryckenorsel area, 16 miles North-East of Antwerp.

The Canadians attack against Calais is going well. They have reached the waterline West of the town, and control all the high ground. They are not meeting such strong opposition as at other Channel ports.

John Wilhem, Reuter’s special correspondent with the U.S. Third Army, reported today that the Germans, having massed their forces about 20 miles West of the Siegfried Line, are launching counter attacks against General Patton’s troops in the Moselle area every few hours. These counter-attacks have so far bought them no gains.

One of the counter-attacks at midday was implemented by thirteen tanks. There was three hours’ furious fighting before the threat was driven off.